As all of you who have followed my newsletter over the years realize, I begin the New Year by introducing the new “Universal Number.” For 2019, the Universal number is {{{{{drum roll}}}}} 3.

I’m sure there are many who are happy to be saying goodbye to 2018, which had its share of trials and tribulations, leaving many of us emotionally spent. Yes, there were lots of challenges on numerous levels for many folks. Those challenges occurred in various areas of our lives, and prevented some of us from being ourselves for a time.

Perhaps you were one of the folks who recognized a relationship you have outgrown, or discovered that a certain relationship was draining your energy and suffocating your spirit. If so, it was time to let go, and allow your soul to soar.

If you haven’t let go, consider whether now is the time. Look around. There are so many possibilities. Why not free yourself and let go of what no longer works for you? I would suggest that you take a breath and feel that new energy shift, the transition into a new vibration — a Universal 3.

The number 3 also is very significant in other ways, a few “3” examples: Mind, Body, and Spirit; Sun, Moon and Earth; Past, Present and Future; Life, Death and Rebirth; Hope, Charity and Faith.

I have always felt, and will always feel, the importance of energy which is what drives us to make important decisions, change our needs and wants, and determine what shall become more important in our lives going forward.

Knowing in our hearts what’s truly important is crucial. Meanwhile, know in the back of your mind that life can change on a dime. And if an unexpected difficult situation does arise, remember that this can be an opportunity for spiritual growth. Embrace the moment, if you can. Do your best, in any event. And remember of course, that Love is a constant that can help see you through.

So let’s welcome our new energetic year of 2019, and have a little fun. Because the number 3 is about creativity, communication, emotional sensitivity, expression, and socializing. In short, “FUN!” A time to allow our hearts to drive our endeavors, feel more passion, become creative, and infuse more play into our work.

As we venture into 2019, I am, as always, looking forward to seeing so many of you in my upcoming travels. I’ll be returning to Albany, Sturbridge, Fort Lauderdale, and Canyon Ranch in Lenox, MA in February. Some places I haven’t visited in a while are also part of my itinerary, including Las Vegas, Salt Lake City, and Seattle.

Also, speaking of events, be sure to join me on my monthly Blog Talk Radio show on Monday, January 7 at 6 pm EST / 3 pm PST. My guest this month will be astrologer Bill Attride. Bill joins me every January to share the astrological outlook for the New Year. Check out this link to listen to the show live on the 7th!

Bring in the New Year with a BANG! if that works for you. Or maybe just extend or accept and invitation to “Enjoy!” In any event, have some “Fun!”

I hope everyone enjoyed the end of the year holiday. I am aware for many that this may be a difficult time, and that the “Happy New Year!” greetings can ring hollow. However, for those in that state of mind, be advised that this is a positive time because it forces us in some ways, to be still. What do I mean by that? Well, with all we do – be it work, school, and/or family and personal obligations – things are often a matter of robotic routine. So it’s good to break out of that.

People here in America actually work more hours per year than people in many other countries around the world. And since it is difficult for many of us to slow down, the end of the year holiday kind of forces us take time off that we would not otherwise take, and thereby regenerate, as we break away from our usual routines. I personally feel that in some ways, unless we’re forced to rest a bit, we will never stop!

Now I’m not saying we’re being busy for no good reason, but we do need to tend to what is involved in making time for ourselves. The end of the year brings us into a different mindset, one that if used properly, will help us benefit by allowing us to reflect on the year just passed, and on what we did or did not do, and what did or did not happen. These thoughts can often propel us to make changes and explore new ways in which to create new paths that will be more beneficial.

Please note that I am not talking about New Year’s resolutions, which we know usually never pan out. If “resolution” is your game, I would suggest that you give yourself short term goals, but again, this is not my focus here.

What I am talking about is stepping off the treadmill of daily life, breathing in what did or did not happen this past year, evaluating, and coming up with a plan to make things work out better in the New Year.

Generally speaking here’s what to expect from the Universal 7 Cycle that will be in effect for 2014, as explained in part by numerologist Alison Baughman:

The Universal Year number influences us at a collective level, globally and locally. Following the Universal 6 Year (2013) – which was about service to others – this is really a very special time. We are being asked to join together in connecting with the Divine Spirit, however you want to define that concept.

The ancients revered the mystical number 7 and associated it with higher knowledge and cosmic wisdom. Indeed, 7 was referred to as the divine number of God. 7 helps us connect to the divine that links us all, regardless of race, color, religion, political or other alliances. 7 is one of the most spiritual numbers among organized religions as well.

In sum, 2014 is a tremendously important year in regards to evolving our collective consciousness. Especially since the end of 2012, we have been experiencing a massive expansion into all areas of the metaphysical and that trend will continue in 2014. We have seen spiritual philosophy make its way into the mainstream with television, radio and media.

7 is considered to be the bridge between Heaven and Earth and that doorway will be pushed wide in 2014. Awakened people who tap into this energy will experience a deeper connection to their soul. Spending time in Nature, practicing meditation and yoga, and approaching your life on a holistic level all would be beneficial activities for the new year. 2014 is a year that emphasizes dreams, messages, psychic phenomenon, wisdom, and our connection to the Divine. People will begin to question “Why am I here?” and “What is the purpose of life?” Hopefully, some definitive answers will begin to manifest.

And so I would most strongly suggest, take some time in 2014 to pause from your hectic life and do a little inner reflection. Don’t take things at face value, but rather, question something that does not resonate with you. Follow your intuition. One of the greatest gifts of the 7 is a deeper understanding of yourself and the world we live in.

Interesting to me that we are going into a year with the same kind of energy I have been talking about during the 2013 end-of-year holidays.

To help ring in the new year, on my radio show, my first New Year’s guest will Bill Attride who is someone who can shed further light on what to expect in 2014. Bill is a brilliant astrologer. I had him on last year and he got great reviews, so I’ve asked him to return for my first show of 2014, January 6th Monday at 6pm EST. Be sure to tune in!

My best wishes that in 2014, you can open up your mind and heart so that you can follow your positive inner ways, whatever they may be. Try to keep in mind throughout the year that 2014 is a Universal 7 Year, which is there for you to use to help you attain your life’s purpose, by establishing a deeper connection to your soul.

Happy 2013 to all! We obviously we got through 12/21/12, despite some Mayan calendar interpretations predicting the end of the world. Obviously those predictions were wrong. It’s time to move forward. We now begin “a new cycle,” as astrologers, numerologists, and my fans well know.

Given that 2+0+1+3 = 6, 2013 is a 6 year-the number generally associated with family, service, responsibility, and work. To know how you may fit into this paradigm, consider meditating on this perspective, and/or doing some research, and/or checking with your guides and teachers who should be able to assist you on your journey into the new year. Also listen to the archives from my Blog Talk Radio show on January 7th. My guest was Bill Attride, a superb and very astute astrologer!

As most of you know, I was asked to be an honorary master of the winter solstice celebration at the Mayan Pyramid in Uxmal, Mexico. There were only a select few permitted to perform ceremony at the sacred pyramids. However, over 400 people attended, from all over the world. The very distinguished Masaru Emoto from Japan was there, and what a special honor it was for me to be at the ceremony with him. As the ceremony was in Spanish, translators came to relay the spoken words into Japanese, French, and English.

We arrived at the temple at 3am. The ceremony lasted four hours. What a beautiful experience! The focus of the ceremony was on Humanity, the union with Mother Earth, and how “All is One.”

During Mr. Emoto’s talk (interpreted into English by his son), he shared that when his grandson was born, he knew he had to do all he could to make the earth a better place. He noted how the power of water in all it’s forms is crucial to this change. With that in mind, he announced that he was donating 65,000 copies of his books to the people of Mexico, to share his message that he feels everyone needs to know. During Mr. Emoto’s speech, there wasn’t a dry eye in the house.

At the Mayan event, the idea of separateness was absent, and instead the emphasis was based on the oneness of Love. Of course, as I have been saying for some time at my seminars, galleries, and private sessions, no matter what the language, the message is Love.

Love is the key for connecting, even when the loss of a loved one is involved. For Love never dies.

Of course, there is no replacement for losing a loved one-ask any parent who has lost a child. From that moment on, our lives are never the same. However, we must learn to live with the loss, and the resulting new reality, until it is time for us to make our own transition, and we get to meet our loved ones again. That, my friends, I promise, is what will be.

As I’ve noted many times before, my mediumship work is about the living, those left here in the physical who need to go on and do what is necessary to continue, and honor our loved ones who are now in Spirit. They are fine, so don’t worry. And we will all experience that fineness once again, first-hand, once our journey here is ended.

Soon I’ll be going to California, Tucson, and Montreal-a first for me. Then to Florida, Denver, the Northwest, and of course my beloved Northeast. Check out my events page for details.

As always it’s my honor to connect or reconnect with each of you, this time in the New Year of 2013.

My thoughts of Love go out to all you. If I may suggest, embrace whatever you feel this coming year of 2013 is meant to be, for you. 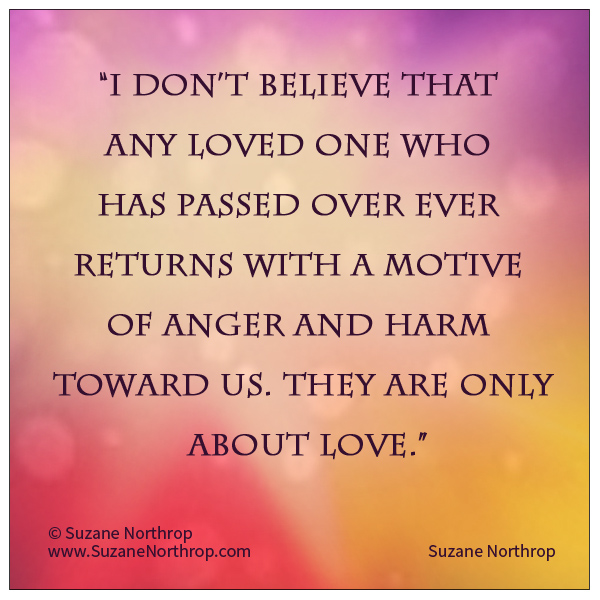 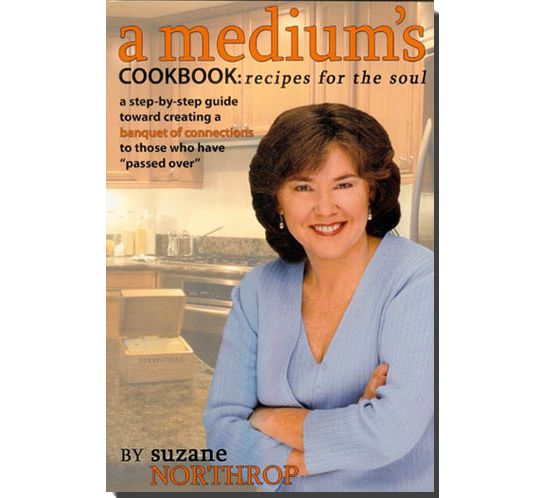 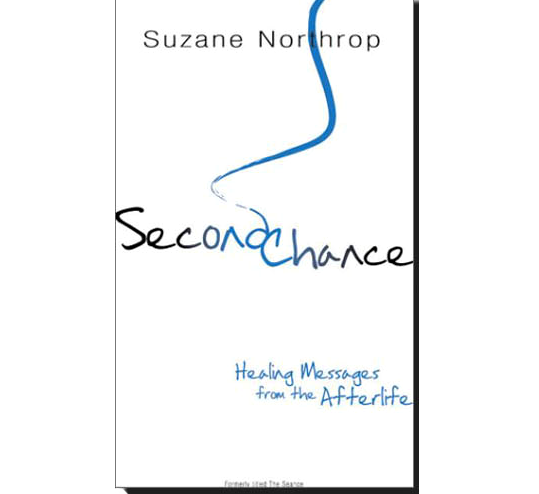 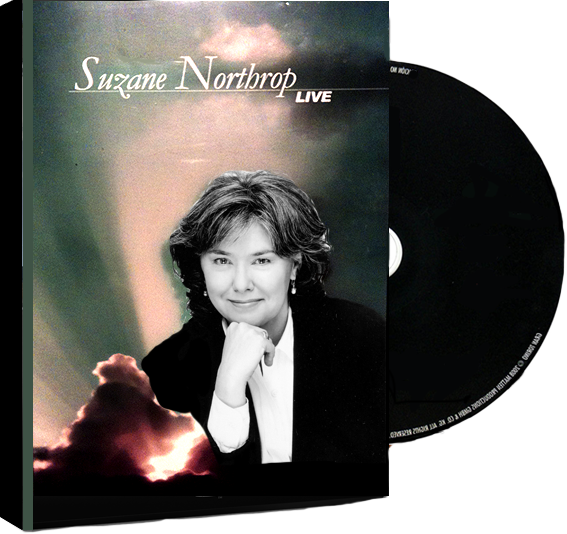